Casa Oltraval is a B&B in the quiet Nature and surrounded by vineyards.
In the heart of Prosecco di Conegliano e Valdobbiadene’s Hills, UNESCO World Heritage Site since 2019, a tourist capital which offers countless opportunities for lovers of art, sport, Nature, food&wine.

The original building dates back to 1800 and in 2016 Gabriella Vettoretti became the owner, transforming it into a design B&B inspired by the Morris style, both in the fabrics and in the wallpaper.

The B&B Casa Oltraval is made up of three floors linked together by a spiral staircase which keeps the original structure of the building, divided into two wings, with an independent entrance.

Our guests are welcome by a little and cosy relaxing and reading room. The breakfast room next door offers the opportunity to enjoy freshly-made breakfasts in a snug and home away from home atmosphere. Outdoor a wide terrace is the ideal place for a summer breakfast or for a glass of La Tordera Prosecco, always available in the fridge at the entrance, surrounded by the beauty of the vineyards.

The reason why of the name Casa Oltraval?

Casa (home) reminds of the snug and home away from home atmosphere, Oltraval is the name of the area of Guia in Valdobbiadene where the B&B is situated, as well as the production area of one of the wines made by La Tordera Winery, owned by Gabriella and her family.

In one if the historical villages in Guia (Valdobbiaene Municipality), known as Guietta, we can find the small area of Oltra Val (literally “beyond the valley”). In fact below the historical street leading to the vineyards, there is a valley where a creek still flows, starting its path from Pianezze Mountain. In the creek cove, at the bottom of the valley, there is tank where the women of the village used to wash the laundry. Today the village is least inhabited but it is situated on the shoulder of a hill covered with vineyards from which very good wines are produced. Many of these vineyards present old vines and ancient varieties included in the Conegliano Valdobbiadene Prosecco D.O.C.G. guidelines: Perera, Verdiso, Bianchetta. In a while our guests will be able to discover this wonder of Nature shaped by the hands of the man.

Let the mind know no twilight.

The solar clock, commonly called sundial, is the instrument with which populations have marked the flow of time since ancient times. It represents an ancient knowledge that had measured the days until the introduction of mechanical watches in the Middle Ages. It was a system of rural utility, ideal to mark the working times in the fields and the end of the working day or to call the believers to the evening prayer.

Casa Oltraval is surrounded by Nature and vineyards which are the expression of the productive activity in this area.

The main decoration of the sundial in Casa Oltraval is the Sun, the protagonist and engine of every sundial. The sun is energy and life for the earth and agricultural activity which starts and lives mainly thanks to its energy.

The moon on the right is the growing phase: a fertile and propitious period in agriculture.

In the Roman mythology Saturn is the God of agriculture and in our decoration it is represented by the star that rests on the profile of the moon, imitating the cycle during which the moon periodically hides Saturn 12 times in a year. After this period, the moon lets Saturn visible for the following 5 years. 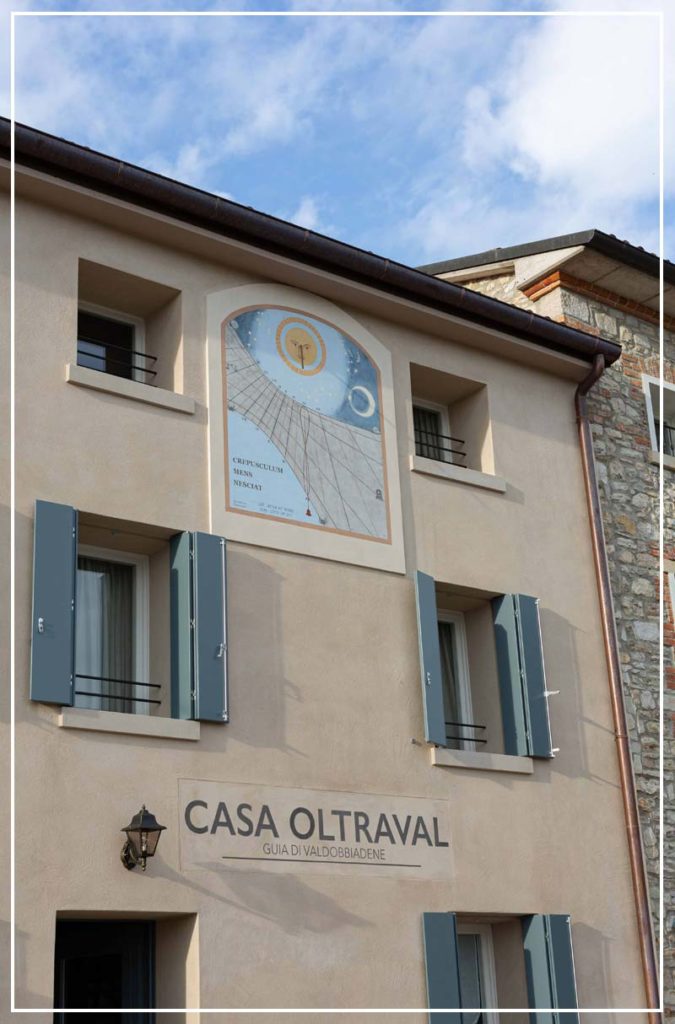 At the top right we find the constellation of Orion which in ancient times served as clock in the night. It is a typically winter constellation that appears in the sky in the autumn evenings and marks the end of summer: the earth rests.

At the top left we find the constellation of Leo which in the northern hemisphere can easily be identified in the months between December and June. Its sunset corresponds to the summer solstice: the summer solstice is the moment that marks the beginning of plowing in the fields, but also the cleaning of the vineyards.

Finally at the bottom there is the constellation of the Virgin which appears in the east in March, culminates on May 10 and disappears in September towards the west. It symbolizes Mother Earth. The figure drawn by these stars has always been associated to a winged woman holding an ear of wheat in her left hand, the star Spica. This female figure governed the barley and wheat harvest and at any latitude it is possible to find it in agricultural cultures. The woman, as perpetuator of the group, is the promoter of this renewal; it is the highest divine expression of the Great Mother: the Earth.

The constellations have been positioned without reproducing the exact orientation in the celestial vault compatibly with the space available above the dial.

This website uses cookies to improve your experience while you navigate through the website. Out of these cookies, the cookies that are categorized as necessary are stored on your browser as they are essential for the working of basic functionalities of the website. We also use third-party cookies that help us analyze and understand how you use this website. These cookies will be stored in your browser only with your consent. You also have the option to opt-out of these cookies. But opting out of some of these cookies may have an effect on your browsing experience.
Necessary Always Enabled
Necessary cookies are absolutely essential for the website to function properly. This category only includes cookies that ensures basic functionalities and security features of the website. These cookies do not store any personal information.
Non-necessary
Any cookies that may not be particularly necessary for the website to function and is used specifically to collect user personal data via analytics, ads, other embedded contents are termed as non-necessary cookies. It is mandatory to procure user consent prior to running these cookies on your website.
SAVE & ACCEPT